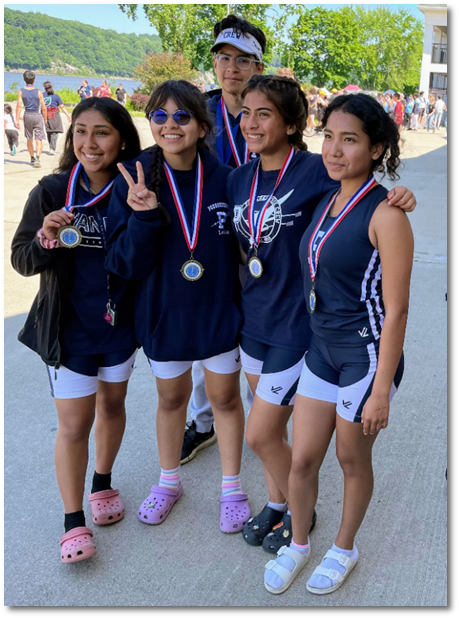 Crew coaches Mike Smith and Bob Creedon want to grow the 74-year legacy of a diverse rowing program in the City of Poughkeepsie, by using a grant worth up to $40,000 to help fund the purchase of equipment, pay for hotel/food costs at regattas, enter additional regattas and attract more students.

Poughkeepsie hosted the Intercollegiate Rowing Association’s Championship on the Hudson River until it departed in 1949. At that time, the organization left its boathouses behind, making them available to local high school crew teams.

“Poughkeepsie was one of the first high schools in New York State to have a rowing team,” said coach Mike Smith, who has been with the program for 32 years. Since the start, the team has been diverse and this is important to Poughkeepsie.

The Head of the Charles Regatta and Gold Cup of Philadelphia teamed up to offer grants to schools demonstrating a commitment to diversity and inclusion.

The Poughkeepsie Crew Parents, a nonprofit organization that supports the team and the school district, applied for one of five Hoffman Challenge Grants offered and was successful.

Brendan Mulvey, race director for Head of the Charles, said Poughkeepsie fit the goals of the grant program to create diversity in the sport.

“We want to learn what the programs truly need funds for and what their pain points are,” Elle Carolan, a grant committee member and Gold Cup board member said, adding that site visits are also planned.

Asked about Poughkeepsie’s selection, Carolan said, “I think it was the strength and commitment of the program’s leaders to diversity, inclusion and belonging. … Seeing the passion and commitment, we felt really comfortable working with them and supporting them to help fulfill their mission.”

Poughkeepsie’s program is free for students. “They’ve never had to pay to row,” Smith said, explaining that in addition to district funds, the crew parents and alum have donated money to help sustain the program.

Grant recipients can use the money as they see fit, with $20,000 being awarded the first year and, upon a successful evaluation and participation in a mentoring program, are eligible for the same amount in the second year.

Creedon and Smith plan to work with the Poughkeepsie Children’s Cabinet partners and the district’s swimming program to increase the number of rowers. The coaches hope to expand participation into the fall season and enter the Head of the Charles and Philadelphia competitions as well as adding a regatta in June or July, according to the application. Smith shared that pre-COVID, the district had about 80 rowers but the number has since dropped to between 45 and 50, as many have graduated.

“We want to promote rowing to students at high school and middle school but also reach younger students,” Smith said. “We want to go to the Boys and Girls Club, Liberty Partnership and introduce the sport of rowing to more students.”

Smith said the team has won 20 state championships since it began and earned 15-20 medals in the Scholastic Nationals. While rowing is the focus, Smith said the program also encourages academics. When taking the team to other places for regattas, Smith brings students to see historical sites such as the Liberty Bell and Betsy Ross Homestead. Many of PCSD’s rowers excel in academics too.

"2023 will mark the 74th season Poughkeepsie Crew has empowered our culturally and economically diverse student body from the City of Poughkeepsie Schools through free access to the sport of rowing as a path to build strength, gain confidence, develop positive relationships and pursue excellence on the water, in our schools, and in our community. The grant from HOCR will help us maintain that tradition for the next 73 years," Creedon said.