Construction activity ramps up in spring 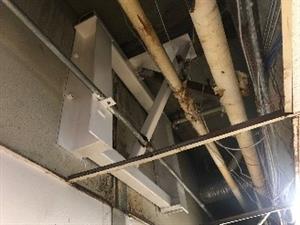 District workers and vendors have been working on buildings throughout the district, including over spring break to make necessary repairs and improvements and more work is on the way as the next phase of the capital improvement project kicks in.

At Poughkeepsie Middle School, waterproofing work was done on the concrete slab by the teacher entrance to prevent water from entering the building and steel was added to the expansion joint which had deteriorated due to water infiltration, Director of Facilities Marcos Rodriguez said.

Columbus Administration Building got an above-ground oil tank and the old, below-ground tank was removed. A new egress is being added to the boiler room to bring the building into compliance with regulations for a building of its size, Rodriguez said. In addition, new lighting was installed in the back room where the egress will be as previously there was none.

Starting this month, Day Automation is going to be adding new video cameras at Poughkeepsie Middle School and Poughkeepsie High School as part of the $3 million security plan approved by the board recently. Work was expedited to get it started now with installation continuing through the summer of 2023, with the bulk of the work being done this August.

while the crews are doing the camera installation, wiring for the additional security upgrades will be done.

This week, a kickoff meeting was held to discuss the roofing work at PHS, PMS, Krieger Elementary

and Warring Elementary as part of the capital project. “We hope to begin construction in late spring and continue through summer an

ing Center, Morse Elementary, Warring and PMS - which is getting two new boilers.

“This work is expected to start over the summer and go through the fall, but it will be ready by winter.”

Finally, new digital sign installation at Krieger, Warring and PMS will take place over the summer and fall.

With all the work going on this summer, some of the summer programming may shift locations. Information will be forthcoming in the Superintendent’s Brief, via the website and Parent Square.