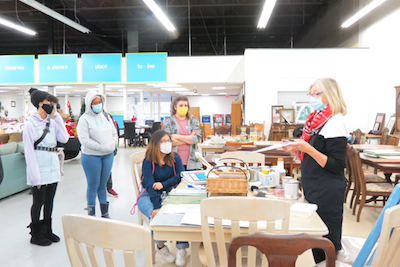 The store is closed to the public Mondays but allowed Debbie Lashlee's advanced art and crafts class in for workshops and to select items for a project.

Art offers many opportunities for students to display their talents and maximize their potential.  PHS art teacher Debbie Lashlee took advantage of an offer from the Poughkeepsie Habitat for Humanity’s ReStore location to do just that.

Habitat for Humanity upcycle volunteer Margaret Ianelli speaks to students at ReStore in Poughkeepsie. The store is closed to the public Mondays but allowed Debbie Lashlee's advanced art and crafts class in for workshops and to select items for a project.

Her advanced art and craft students learned about upcycling, recycling and refurbishing in class and were given a project to do: Upcycle (repurpose with a higher value), recycle (convert waste into something useful) or refurbish (clean up and renew) something for yourself or as a gift for someone else.

To support Ms. Lashlee’s lesson, ReStore provided each student with a $25 gift card to ReStore to use at their store. Since ReStore opened, more than 800 tons of items have been saved from landfills, according to a Habitat for Humanity of Dutchess County fact sheet.

On Monday, seven PHS students went to ReStore to use their gift cards and participate in two mini-workshops. PHS junior Phoenix Winthrow, purchased a desk and chair with her gift card. “I’m going to repaint them to fit the theme of my room,” she said after Monday’s workshops. “This is something I actually need and I couldn’t find something in my budget.”

Kyazia West, a senior, said she has Sweet 16 photos she’d like to frame, so she was scouting out different frames. “I’m looking for something I could do a collage in,” she said.

Tytiana Britt and Deeanna Powers were focused on the variety of lamps available, saying that while they are basic, they offer a variety of options from doing something with the lampshade, the base or both.

Deanna Powers and Tytiana Britt look at lamps.
Tytiana liked, “the idea of taking something someone else sees as old and having less value and then turning it into something better.”

Deeanna said she liked that the assignment was open-ended. “You could choose whatever you wanted and change it into something you would like.” “We have creative liberties,” Tytiana interjected.
That’s exactly what Margaret Ianelli, an upcycle volunteer, stressed to students in her workshop. Ianelli picks items from the floor, which ReStore donates to her, upcycles them and then donates them back for ReStore to sell.

She talked to students about how old shutters can be made into bulletin boards, how to apply different paint treatments, how they can take one item, add something else and make it totally different.

“The best part is, it is entirely your imagination,” Ianelli said.

Marist College student Hayden Abrahams was there to share how he took his artistic talents and put them to use post high school, by performing as well as tips for college.

For the project, students must show before, intermediate and final photos and submit a plan for what they want to do along with a list of supplies they’ll need, the steps they’ll take and what the expected outcome is. “It’s nice to see them so enthusiastic about doing it. I’m glad I can be a part of that,” Lashlee said

Thank you Ms. Lashlee and ReStore for helping our students realize their potential and creativity. 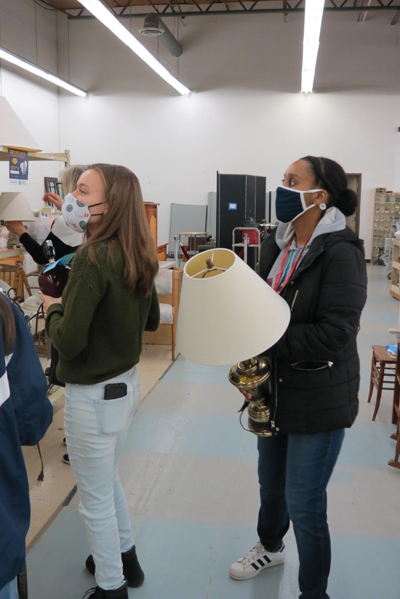