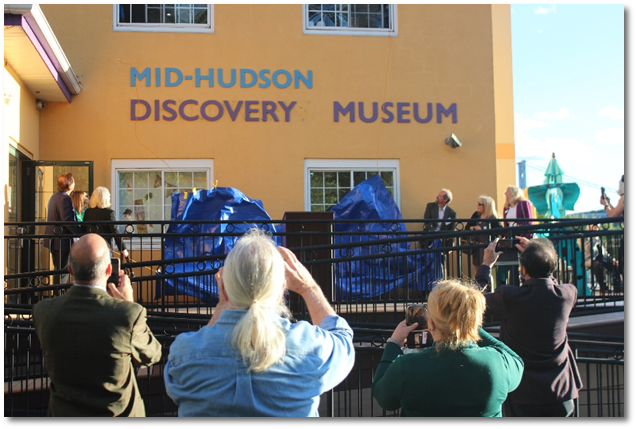 The Mid-Hudson Discovery Museum, formerly known as the Mid-Hudson Children’s Museum, is looking to collaborate with and provide programming for Dutchess County’s school districts, including Poughkeepsie.

The museum’s new focus is to serve children up to the age of 12 with a heavy emphasis on hands-on Science Technology Engineering and Math (STEM) exhibits that help pique children’s curiosity.

“A curious child is a learning child,” the museum’s new Executive Director Jeffrey Sasson said. “Here at the museum, we get to witness curiosity every day.”

At the event to unveil the museum’s new name on Sept. 22, PCSD Superintendent Dr. Eric J. Rosser, who co-chairs the Poughkeepsie Children’s Cabinet with City of

“We’re so appreciative of the museum being able to open their doors and to extend the learning and discovery for our children,” Rosser said. “Much of what we do as leaders in the community is based around the fact that we have resources, we have talent, we have the experience necessary in this region to have tremendous impact.”

Sasson and museum staff are looking to partner with the county’s school districts to create STEM related programming specifically for them and also to help write New Generation Science Standards (NGSS) curriculum, which Sasson described as a marriage of formal and informal hands-on education that is beneficial to young students.

“If you don’t catch a child by fourth grade wanting to learn math, it won’t take hold,” Sasson said. “The same goes for science.”

The museum is applying for grants so it can hire three STEM educators to go to the districts to implement NGSS. New programs are tentatively expected to begin in January. “We are in a perfect position to partner with the school districts,” he said. “The goal is to be a resource to the districts in STEM education.”

Sasson has spoken with Rosser, who approves of the museum’s mission, and also some PCSD educators who want to utilize NGSS. The executive director is open to all ideas.

“The more I talk to people, the more they’re interested in it,” Sasson said. “By taking a collaborative approach, it will work.”